Finishing the repairs to the Kadet fuselage...

While riding out the remainder of hurricane Matthew, I got some time to tinker on this project a bit more. We were running on a whole house generator (power was out), and it had no problem running the home and my home workshop. Great time to play in the storm!

So, I set about to cover the top of the stab and elevator, and fix a few other items... I trimmed the Monokote a little larger than needed, tacked it in place at 300 degrees F around the root of the stab, pull it out to the edge of the stab and tacked it down there, pulled it around the leading edge and tacked it, then folded the elevator all the way down and tacked it into the hinge line. Once tacked in place, I sealed it all the way around the perimeter, and trimmed the excess away. Using a small T-Pin, I punched a tiny hole in the bottom side of each bay of the stab structure to allow air out... I then set the sealing iron to 350 degress F, and shrank the covering across the entire structure on the top side. I use the heat gun in a circular pattern to get any wrinkles out of the corners, and the iron again to seal the covering to all parts of the structure for strength. You can find the temp chart I put together on my website at http://www.RCDave.net for various covering brands. 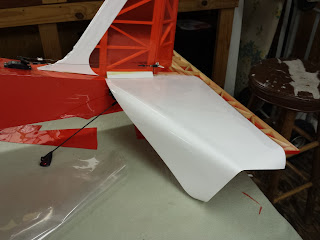 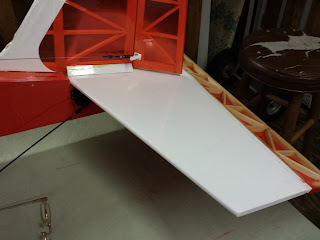 Once the LH side was done, I moved over and covered the RH side of the stab in the same way. 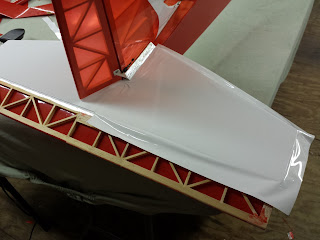 I cut more material and covered the elevator structure new, using the same methods used for the stab. Once completed, I use the sealing iron and touch the pin holes in the bottom to close those back up. 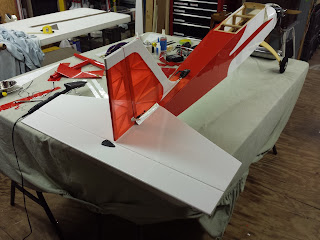 All finished with the elevator and stab, here's a look from the bottom... 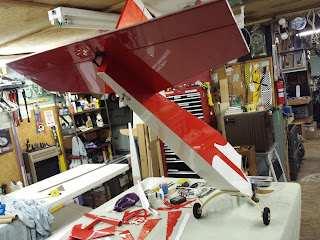 I retained the factory covering on the vertical stab and rudder, but it needed a bit of attention. Sig uses a low temp "china film" of some sort, and it had come loose where the white wraps around the leading edge. I had a bunch of scrap white on the table, so I used little pieces of that to tack to the OEM covering, pull it around the leading edge, and seal it back down. 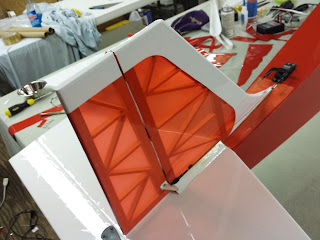 The transparent film had come loose where it wrapped around the trailing edge of the rudder. I have clear monokote for this sort of application... I cut a strip, tacked it to the OEM covering, wrapped it around the rear of the rudder, and sealed it down. Good as new! (probably better, hahahaha) 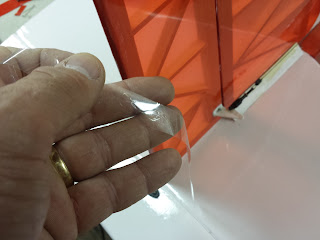 OK, the covering on the fuselage is all repaired, problems in the structure are fixed and reinforced, batteries cycled, fuel lines replaced, prop repaired, and other misc stuff finished. Time to get the wing down and check it over for any needed repairs... 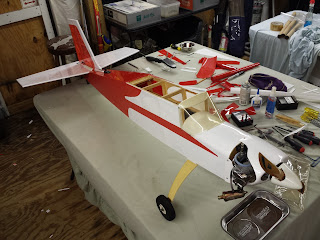